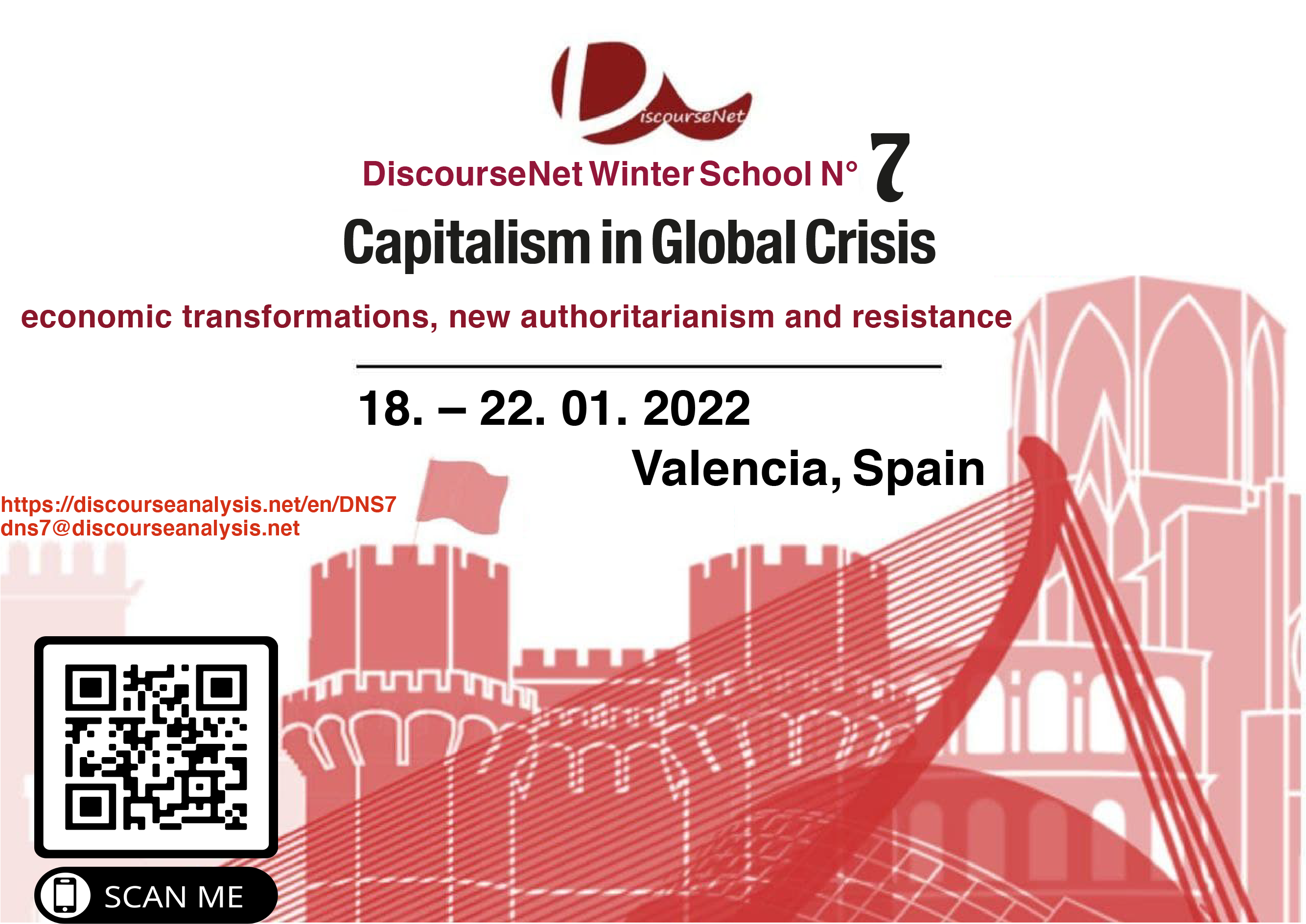 Send your application until October 31st at: dns7@discourseanalysis.net

Due to the Covid 19 situation in Spain and in Europe, the #DNS7 Workshop has been postponed to January 2022. Now, we are finally organising this important event! However, should the development of the situation go in an unwanted direction, we will notify you on time. 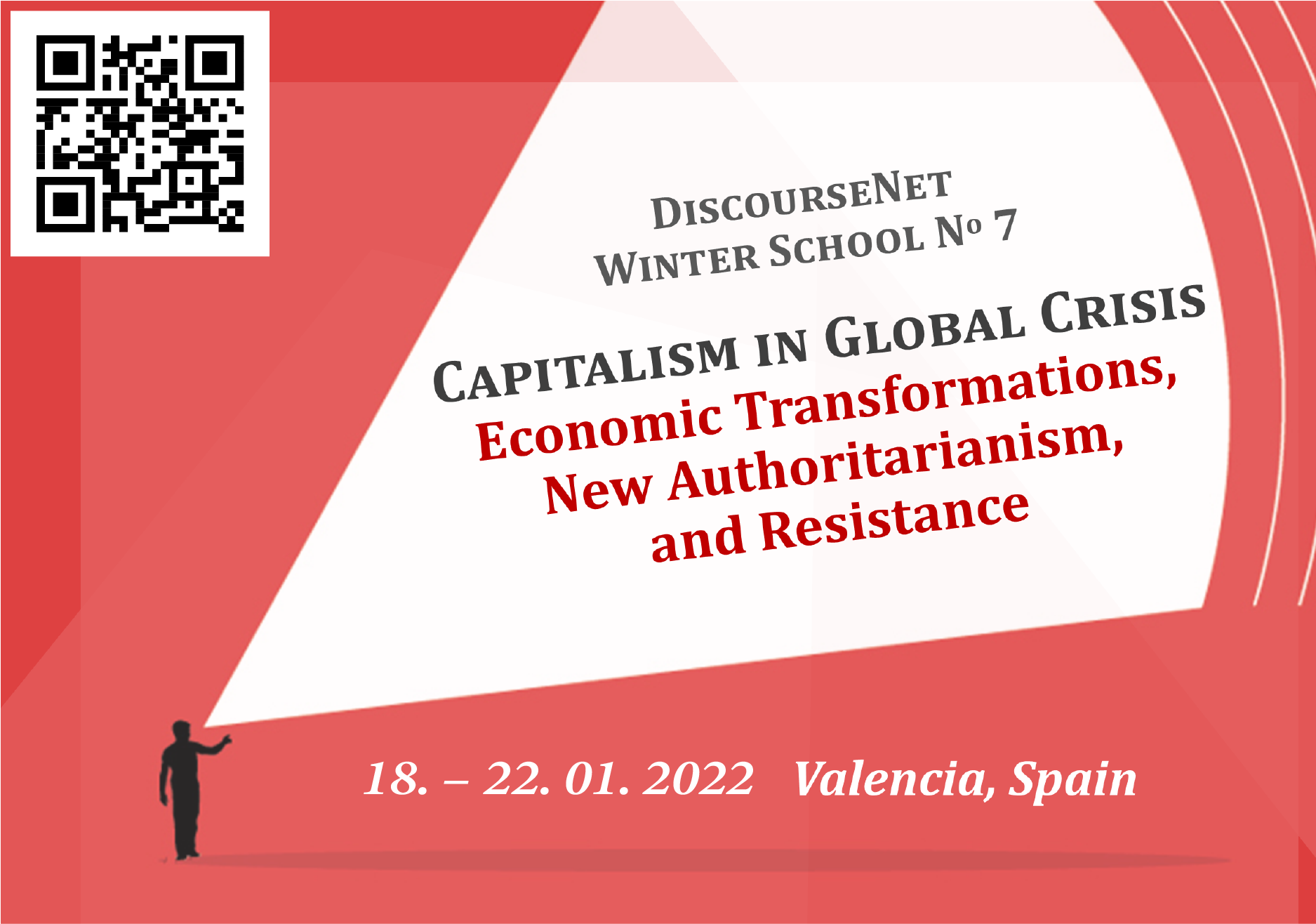 DiscourseNet Winter School No. 7 brings together advanced MA as well as PhD students (BA students with an own research project are also welcome) who want to pursue research on Capitalism in Global Crisis revolving around economic transformations, new authoritarianism, and resistance with respect to Discourse Studies. We will discuss the methodological and theoretical challenges of their thesis projects or first ideas.

In the last decades, the economies and societies in different countries and regions as well as the global economic power relations have changed. The COVID19 crisis has accelerated and deepened these dynamics. Three characteristics are significant: first, the US economic hegemony, expressed by a dominant position in almost all traditional leading industries, becomes step by step replaced by a tri-pole structure consisting by a rising Asian field of economic innovation (with China as regional superpower), a declining North American pole and a consolidating European pole (with Germany as regional hegemon) torn between the aspiring East and former West. Second, rising economic inequalities can be observed in all capitalist economies, including China, Russia and East/Central Europe, with the formation of a small wealthy elite on the top of economic hierarchy, shrinking middle classes splitting up between the top and bottom, and a widening array of lower classes more and more excluded from social recognition, welfare, consumption and other forms of social participation. Wealthy and innovative areas on the one hand, and declining regions disconnected from global innovations on the other hand reflect these cleavages geographically. And, finally, a fourth technological revolution (catchwords: Industry 4.0, digitalization, 5G, green economy, rare earth elements) is currently changing global value chains, working relations and the general distribution of labour and value. These tendencies of the global economy have huge impacts on political discourses, social identities, life-styles, social conflicts and the formation of new milieus. Among diverse social, cultural and political reactions to these global transformations new forms of authoritarianism seem to be of significant analytical importance.

New authoritarianism can take different forms. The narrative that the (Western) world inscribes itself within a history of progress, of political and social advances and that this process is irreversible are no longer convincing. New forms of nationalism, nativism, racism, anti-semitism, anti-feminism, chauvinism, anti-social, religious extremism, ethnocentrism and ideological responses to economic crises are threatening human emancipation. New forms of authoritarian governance arise on a plurality of social backgrounds and in a variety of forms, from nationalism, to populism and from right-wing extremism towards ideologies of economic impositions. These anti-emancipatory tendencies are not limited to specific social movements or politics. Therefore, they require an analysis of a diversity of social phenomenon, like power constellations, discourses, historic memory, economic conditions, processes of subjectivation, etc. In contrast to extremism, the approach on authoritarianism does not analyze its objects from the margins of society; and unlike populism, authoritarianism does not require an approach on hegemony. However, there are also forms of extremist or populist authoritarianism. Yet, the role of new authoritarianism for and within ongoing global transformations of the economy seems to be oscillating between a consolidation of existing power relations and a nationalist form of resistance against certain neoliberal policies.

Despite the rise of authoritarian tendencies, there is a notable number of social movements resisting them: the feminist movement, LGBTQ movement, ecological movements, minority group movements, worker movements, refugee movements, anti-racist, anti-nationalist, anti-fascist, anti-capitalist movements, and also more authoritarian resistance. Many of these movements explicitly argue against silencing of experiences of various social groups, and do the work of revealing structures of power, imagining alternatives and proposing solutions to power imbalances, exclusion, symbolic and physical violence. This ideological work forms new subjectivities and redefines existing ones, it creates new ways of expressing the social agency. Development of the digital communication infrastructure has been especially important in these processes, as online spaces have been pivotal for coordination of social action, assisting in formation of global social movements. Critical discourse studies have been especially active in critiquing the less-democratic discourses, while the analysis of resistant discourses and clashes between different kinds of discourses, as well as conditions that allow them to arise and develop, are also of significance. We welcome papers exploring these and other possible dimensions of resistant discourses.

The list of possible topics includes (but is not constrained to) the following:

· Forms of authoritarianism and its relation to neoliberalism in crisis

· Antisemitism and right-wing conspiracies in capitalism

· Ideologies and post-truth in times of technological revolutions

· Digital transformation & forms of culture and sociality in late capitalism

· Digital discourses and other forms of making the global crisis

The aim of the Winter School is to bring together young and established discourse researchers, and to address practical challenges in discourse research. The event will provide a collaborative exchange and hands-on research experience in a rather informal workshop setting.

More experienced scholars from the Universities of Giessen, Moscow, Berlin/Tyumen, Bari, Milan/Bergamo and Valencia, together with guests from other international universities, will give introductory workshops on the various fields of inquiry.