Violence, Space, and the Archives 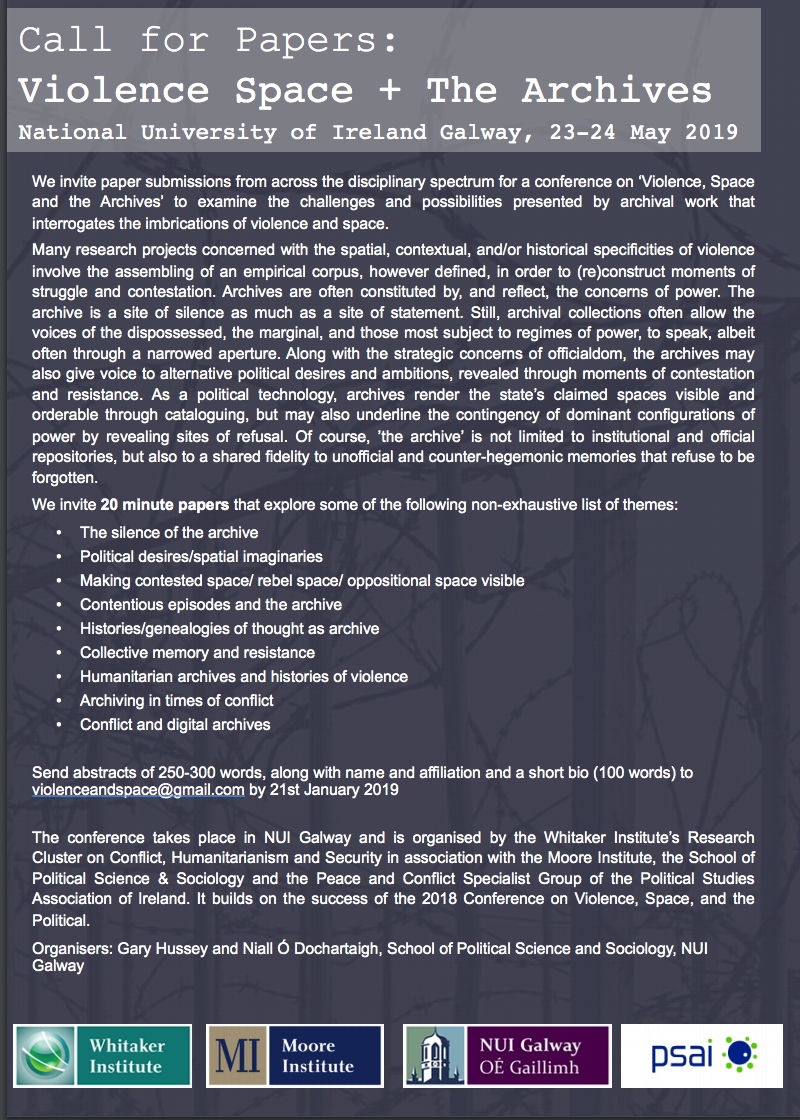 Call for Papers: Violence, Space, and the Archives. 23-24 May 2019, National University of Ireland, Galway.

We invite paper submissions from across the disciplinary spectrum for a conference on 'Violence, Space and the Archives' to examine the challenges and possibilities presented by archival work that interrogates the imbrications of violence and space.
Many research projects concerned with the spatial, contextual, and/or historical specificities of violence involve the assembling of an empirical corpus, however defined, in order to (re)construct moments of struggle and contestation. Archives are often constituted by, and reflect, the concerns of power. The archive is a site of silence as much as a site of statement. Still, archival collections often allow the voices of the dispossessed, the marginal, and those most subject to regimes of power, to speak, albeit often through a narrowed aperture. Along with the strategic concerns of officialdom, the archives may also give voice to alternative political desires and ambitions, revealed through moments of contestation and resistance. As a political technology, archives render the state's claimed spaces visible and orderable through cataloguing, but may also underline the contingency of dominant configurations of power by revealing sites of refusal. Of course, 'the archive' is not limited to institutional and official repositories, but also to a shared fidelity to unofficial and counter-hegemonic memories that refuse to be forgotten.

We invite 20 minute papers that explore some of the following non-exhaustive list of themes:

Send abstracts of 250-300 words, along with name and affiliation and a short bio (100 words) to violenceandspace@gmail.com by 21st January 2019

The conference takes place in NUI Galway and is organised by the Whitaker Institute’s Research Cluster on Conflict, Humanitarianism and Security in association with the Moore Institute, the School of Political Science & Sociology and the Peace and Conflict Specialist Group of the Political Studies Association of Ireland. It builds on the success of the 2018 Conference on Violence, Space, and the Political.