Discourses of War and Peace: Reflections on and around the Aggression against Ukraine - DiscourseNet ad-hoc workshop 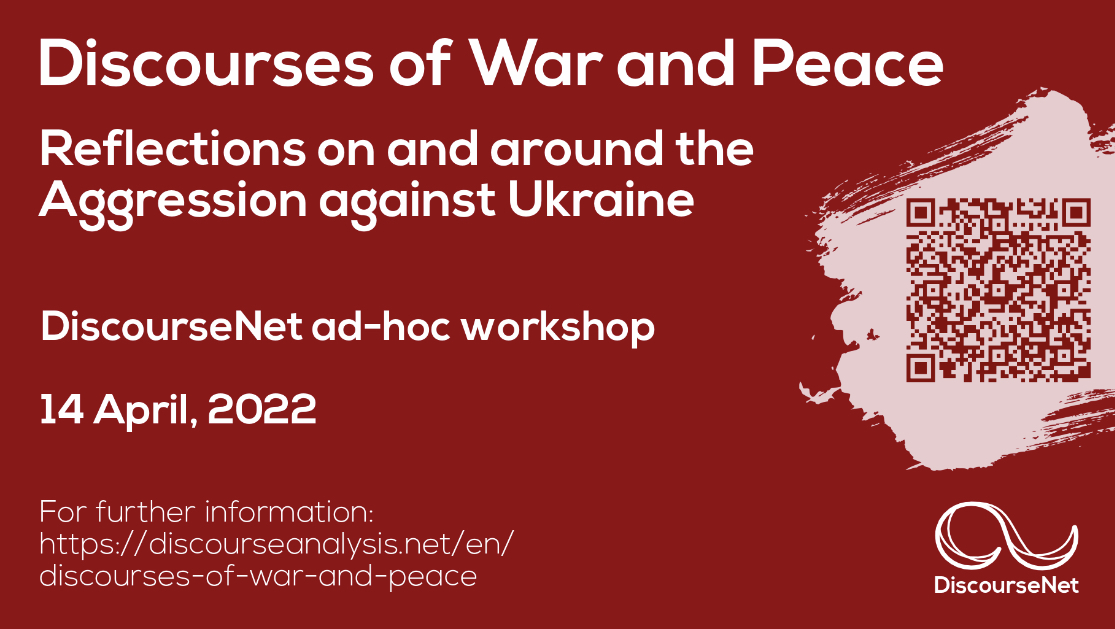 Welcome to Discourses of War and Peace, a virtual conference in response to the ongoing war in Ukraine. Our first ad-hoc workshop will take place on 14 April 2022 on Zoom.

Two steps for joining this event:

In the light of the ongoing campaign of the Russian government against the Ukrainian people, DiscourseNet, the international association of discourse researchers, expresses its deep solidarity with all the people who suffer (directly and indirectly) from the military conflict — especially our friends and colleagues from Ukraine directly affected by it. We are fully aware of the fact that the current situation will dramatically worsen the life and work conditions of our Russian colleagues, too.

We observe the war in Ukraine with great concern. DiscourseNet encourages critical research to monitor the invasion and its effects on Ukraine, Russia and all the countries involved. In this mission, we expressly want to strengthen our relationship with Ukrainian as well as Russian scholars.

In the next few weeks, DiscourseNet will promote further discussions and host events about what discourse researchers can do in order to provide non-violent and democratic spaces for conflict prevention and resolution. We will discuss especially the power of words in armed conflicts as well as the power of discourses for peaceful dialogue.

The ongoing war’s conceptualization, contradictions and conflict communication create an impression of a mixture of incompatible components reminding a patchwork, where every piece of fabric is unique by its form and colour. They are supposed to tell us the whole story in its logic order, but, basically, represent a mixture of discrete sheds.

The Russian World imaginary: transmitting supremacy through language and culture

I am going to address the “Russian world” imaginary and its role in the justification of the war in Ukraine. How does Russian state cultural policy contribute to the "Russian world" imaginary? What is the ‘mission of culture’ in constructing and maintaining the Russian world and its subjects?

Laughter through Tears: Role of Humor in Ukrainian Resistance Against Russian Aggression

Russia’s invasion of Ukraine that started on February 24 2022 leads not only to the shift of real and mental borders in Europe but also drives profound changes of not only geopolitical visions of the contemporary world but also of Ukrainian mentality and national identity. The paper seeks to define the role of humour in shaping the image of the enemy, Ukrainian army and Ukrainian nation. The data set is composed of more than 1000 caricatures and memes produced between February 24 and March 29.

The discursive political economy of the Russian rentier economy

The presentation analyses the discursive, economic and political elements of the Russian political economy that is – in contrast to almost all other rentier states – developing from a trade oriented economy to a rentier state. Through this “back-ward” orientation, specific expansionary dynamics emerge that Arrighi described as a switch from C-T-C´ to T-C-T’.

War of Visuals, Emotions, and the Use of Cyber Tools

The contribution will explore the nexus of visuals, emotions and new cyber tools in the Russian war against Ukraine.Visuals of conflict and suffering evoke emotions. The contribution considers how such visuals are used for mobilization, and how various people – from ordinary ones to hackers – have turned to various cyber tools to support either side in the war.

For centuries, Russian domestic policies have swung between “Western” and “Slavophile” phases. In my contribution, I propose to retrace some developments in Russian public discourse since perestroika, which has seen a progressive turn against the “West”. Starting from my discourse analysis of Putin in the early 2010s, I will discuss the discursive construction of collective paranoia in Russia (e.g. against the “NATO threat”) since the 2000s and some parallels with the recent rise of extreme right-wing discourses in liberal democracies.

The aim of the research is to collect and compare how new challenges and differences of political language have reflected in national and global media. Research methods are discursive and narrative analysis of media mainstreams during the war between Ukraine and Russia in Slavic languages, English and French.

Ideological preparation for Russia’s overt invasion of Ukraine started much earlier than 2022. The first indicative shifts in the official discourse that can be retrospectively interpreted as such preparation can be traced at least back to the Russian constitutional referendum of 2020.

The discursive power of memes: Memetic discourse around the Ukrainian war

Memes offer responsive acute commentary on societal matters by using, reinforcing and recontextualising established stereotypes. They provide non-violent and democratic spaces of discussion for conflicts. Their inevitable discursive situatedness makes them an attractive tool for political online engagement, but at the same time, their ambiguity and commonplaceness undermines that function in many ways. The presentation focuses on memes on the Ukrainian war that spread in Eastern (Russia, Estonia, Belarus) and Western Europe (Spain). We analyse the discursive contexts of four small meme samples referring to the personalisation or “face” of the war: Putin, and the motives that relate to that: liar, enemy, coward etc. We pinpoint the use of local references to show the connections between the degree of a country’s engagement in the conflict and the content of memes in that country.

"The good refugee is welcome": The role of gender when fleeing from war

Media reports on Ukrainian refugees differ from the coverage on Syrian refugees. Beyond potential racism expressed in this discourse, historic and political differences, the potential identification with refugees, and gender discrimination are at stake. Is there a stereotype of a “good refugee” who is welcome to the EU?

We critically examine discourses of the 'Russian world’ / ‘русский мир’, the idea that Russia ends where the Russian language ends, tracing concepts of the ‘civilizational mission’ of Russian from the imperial era to the present to show how these discourses move from the realm of soft power to military invasion.